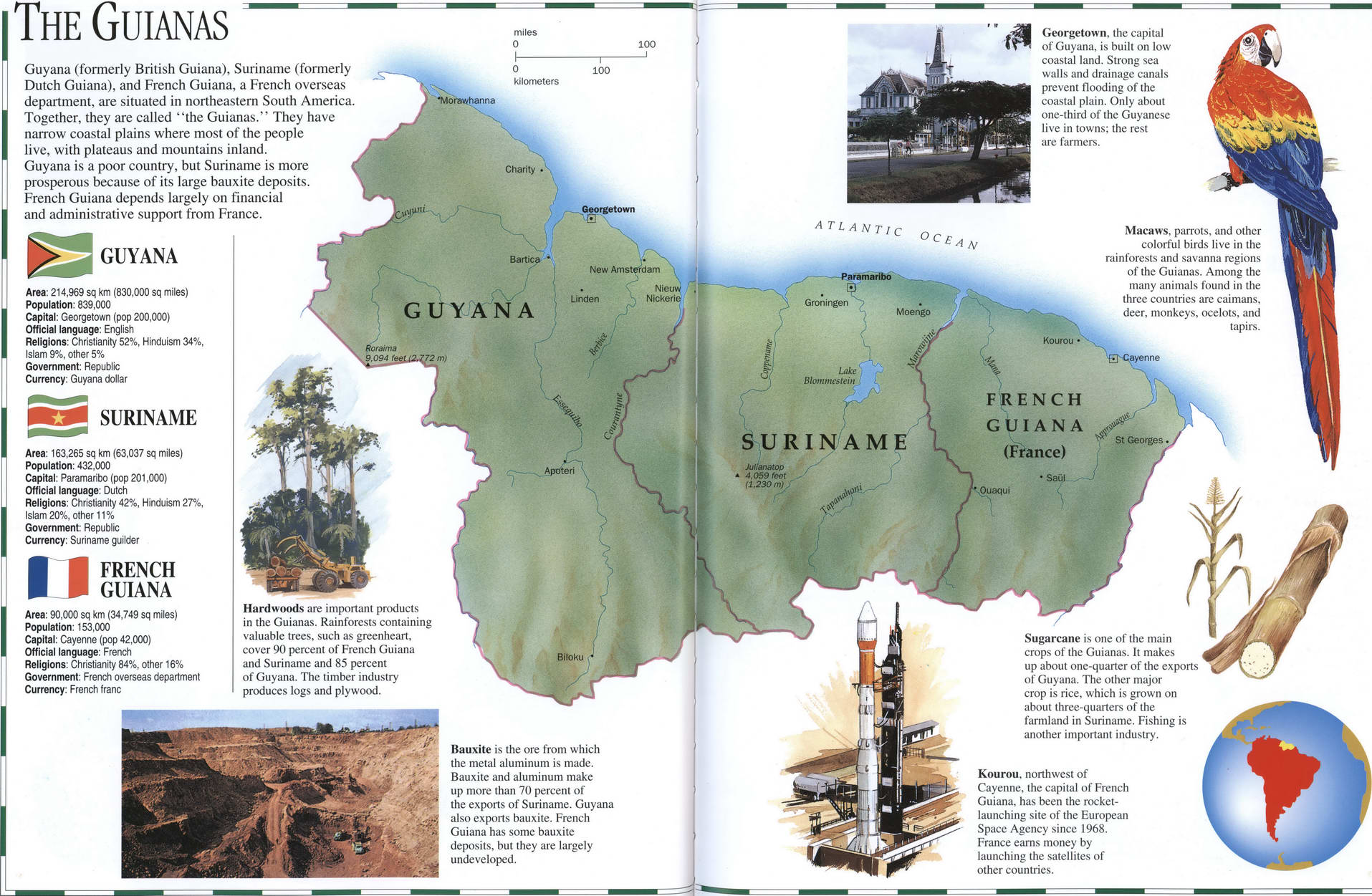 French Guiana geography map
Guyana (formerly British Guiana). Suriname (formerly Dulch  Guiana), and Freneh Guiana, a French overseas department, are situated  in northeastern South America. Together, they are called "the Guianas."  They have narrow coastal plains where most of the people live, with  plateaus and mountains inland. Guyana is a poor country, but Suriname is  more prosperous because of its large bauxite deposits. French Guiana  depends largely on financial and administrative support from France.
FRENCH  GUIANA highlights
Area: 90,000 sq km (34,749 sq miles) Population: 153,000  Capital: Cayenne (pop 42,000) Official language: French Religions:  Christianity 84%, other 16% Government: French overseas department  Currency: French franc.
Hardwoods arc important products in the Guianas. Rainforests  containing valuable trees, such as greenheart, cover 90 percent of  French Guiana and Suriname and 85 percent of Guyana. The timber industry  produces logs and plywood.
Bauxite is the ore from which the metal aluminum is made.  Bauxite and aluminum make up more than 70 percent of the exports of  Suriname. Guyana also exports bauxite. French Guiana has some bauxite  deposits, but they are largely undeveloped.
Georgetown, the capital of Guyana, is built on low coastal land.  Strong sea walls and drainage canals prevent flooding of the coastal  plain. Only about one-third of the Gu\ anew live in towns; ihe rest are  tanners.
Macaws, parrots, and other colorful birds live in the  rainforests and savanna regions of the Guianas. Among Ihe many animals  found in the three countries are caimans, deer, monkeys, ocelots, and  tapirs.
Sugarcane is one of the main crops of the Guianas. It makes up  about one-quarter of the exports of Guyana. The other major crop is  rice, which is grown on about three-quarters of the farmland in  Suriname. Fishing is another important industry.
Kourou, northwest of Cayenne, the capital of French Guiana, has  been the rocket-launching site of the European Space Agency since 1968.  France earns money by launching the satellites of other countries.
Back to content